Side effects of COVID-19 vaccines in Switzerland – update

As at 6 April 2021, Swissmedic, in collaboration with the regional pharmacovigilance centres (in particular with the Ticino EOC reference centre), has evaluated 1174 reports of suspected adverse drug reactions (ADR) to COVID-19 vaccinations in Switzerland. The reports corroborate the side effects profile identified during the authorisation studies and described in the medicinal product information. They do not alter the positive ratio of benefits to risks of the vaccines used.

577 reports involve Pfizer/BioNTech's Comirnaty®, while 580 are associated with Moderna's COVID-19 vaccine. In seventeen cases, the vaccine was not specified. A small number of reports explicitly describe reactions following the second dose of the vaccine (n=79 for Comirnaty, n=78 for Moderna). Most of the reports were submitted by medical professionals while 92 (7.8%) came directly from those affected, i.e. the patients.

According to information from the FOPH, around 1.6 million vaccine doses have been administered in Switzerland up to and including 4 April 2021, and approximately 604,000 people have been fully vaccinated. Since there is often a delay in sending reports on adverse drug reactions to Swissmedic and it also takes time to carefully evaluate them, it is not possible to directly compare the reports shown here with the vaccinations given. Retrospectively, however, there is an approximate reporting rate of one per 1,000 doses administered.

The majority of the reports involved more than one reaction (a total of 2,960 reactions in 1174 reports, equating to an average of 2.5 reactions per report).

The reactions most commonly reported in the cases classified as serious were fever (56), shortness of breath (31), headache/migraine (28), reactivation of shingles (26), hypersensitivity (22) /anaphylactic reactions (12), vomiting (20), fatigue symptoms (19), blood pressure rise (19), infection with COVID-19 disease (17)1 and dizziness (18). Since a single report generally involves more than one reaction, reactions such as fever or headache are reported in cases that are classified as serious overall as well as in non-serious cases.

44 cases of herpes zoster (shingles) were reported, 26 of which were rated as serious – in most cases for medical reasons. Herpes zoster is caused by a reactivation of varicella zoster viruses (VZV). The primary infection with VZV leads to chickenpox. Risk factors for herpes zoster include immunosuppressive treatments, diabetes mellitus, female gender, psychological stress and mechanical trauma. The incidence of herpes zoster increases with age, ranging from 3 in 1,000 among 40–50-year-olds to 10 in 1,000 among the over-80s. The average age of those affected in the reported cases was 72, and the zoster appeared between one and 43 days after vaccination. The possibility of a causal connection between the vaccinations and the onset of herpes zoster is currently under investigation.

Figures 1 and 2 respectively show the 15 most frequently reported reactions associated with Comirnaty® and Moderna's COVID-19 vaccine. The most common reactions were injection site reactions (redness, itching, pain and swelling), fever, headaches, muscle pain and shivering. Cases with these reactions accounted for more than half of the reports (56%). 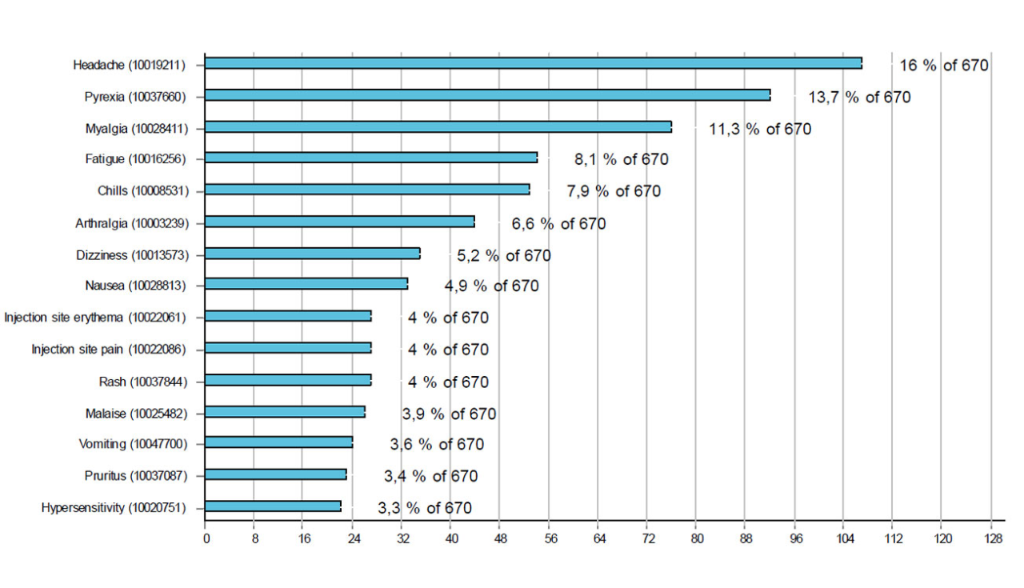 Figure 1: The 15 most frequently reported reactions (n = 670) associated with Comirnaty®. The figures in brackets refer to the codes used internationally to record reactions. 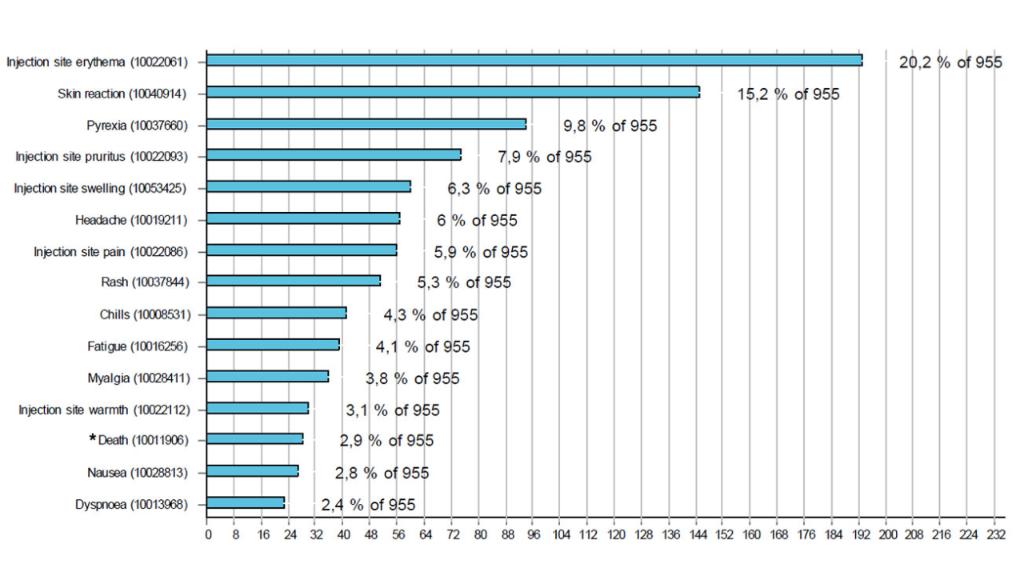 Figure 2: The 15 most frequently reported reactions (n = 955) associated with Moderna's COVID-19 vaccine. The figures in brackets refer to the codes used internationally to record reactions.

*) In 55 serious cases, the people concerned died at differing intervals after receiving the vaccine. Their average age was 84 years, and the majority of them had serious pre-existing conditions. These cases were analysed with particular care. As far as is known at present, death was caused by conditions such as infections, cardiovascular events or diseases of the lungs and airways that occurred independently of the vaccinations. Despite a chronological correlation, there is no concrete evidence to suggest that the vaccination was the cause of death.

Reports of local reactions at the injection site, including those with delayed onset, account for a much larger proportion of reports relating to the COVID-19 vaccine from Moderna compared to the reports for Comirnaty®, for which general reactions are more likely to be reported. Some of these may be “stimulated reports” following the publication in February of reports about delayed local reactions after the administration of the Moderna vaccine.

In 55 serious cases, the people concerned died at differing intervals after receiving the vaccine. Their average age was 84 years, and the majority of them had serious pre-existing conditions. These cases were analysed with particular care. As far as is known at present, death was caused by conditions such as infections, cardiovascular events or diseases of the lungs and airways that occurred independently of the vaccinations. Despite a chronological correlation, there is no concrete evidence to suggest that the vaccination was the cause of death. The drug regulatory authorities of other countries and the WHO reached similar conclusions when they evaluated deaths with a temporal link to the COVID-19 vaccines authorised in Switzerland.

The reports of adverse reactions received and analysed to date do not change the positive benefit-risk profile of the COVID-19 vaccines. The reports now provide us with a clearer picture of the vaccines’ safety in daily use. This largely confirms their known side effects profile. Known side effects of COVID-19 vaccines are listed in the continually updated medicinal product information texts published on www.swissmedicinfo.ch.

Comments on the interpretation of the data
Given the methodology of the spontaneous reporting system, the following factors need to be taken into account when interpreting the data presented here: The figures in this report are based on suspected reports received by Swissmedic from healthcare professionals, affected individuals or pharmaceutical companies and entered in the database following a review and evaluation.

All the reported reactions are suspected cases. This means that, in individual cases, it has not been ascertained whether the reported reaction was merely observed around the time of the vaccination or was actually caused by it. The possible causality is also investigated as part of a careful analysis of the cases.

Since not all reactions are reported, the figures presented here do not allow any reliable conclusions to be drawn about the number of reactions that have actually occurred. The number of suspected cases for each vaccine can depend greatly on how many people received this vaccine in the period in question. The figures for suspected cases of vaccination reactions are just one of many factors considered in the ongoing assessment of the risk-benefit profile of vaccines. Swissmedic incorporates the findings from the spontaneous reports in the scientific analysis of all the available data in order to be able to draw correct conclusions about the safety profile of a vaccine.

1) These reports relate to cases of COVID-19 where there was a correlation in time with the vaccination. Since the vaccinated persons had not been tested before they were vaccinated and the human body first needs to build up its protection against the virus, the onset of COVID-19 disease in temporal correlation with vaccination is possible. However, there is no causal link with the vaccination. Unlike live vaccines – e.g. those against measles, mumps and rubella (MMR) – COVID-19 vaccines do not contain (attenuated) viruses and cannot therefore trigger COVID-19 disease.

As at 7 March 2021, over 950,000 people had received a first or second dose of a vaccine against COVID-19 in Switzerland according to the Federal Office of Public Health (FOPH).

Reporting of adverse drug reactions by doctors and pharmacists